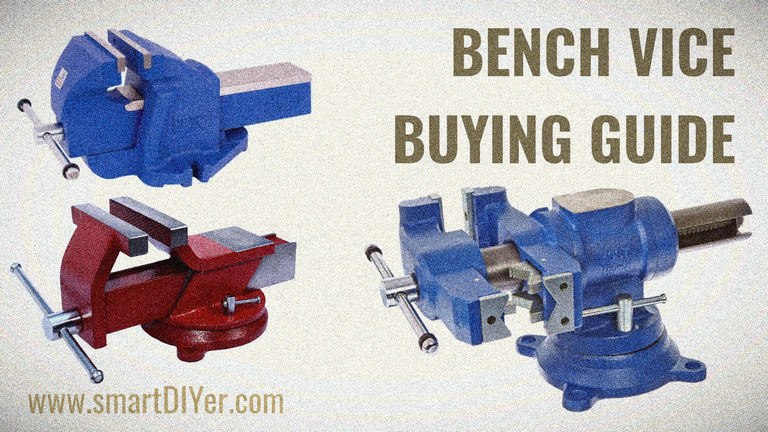 A Bench Vice is basic work holding device. No matter if you are a Fabricator, Machinist, Electrician or an Automotive Mechanic you always need a Bench Vice. Here in this article we discuss the types of Bench Vices, their materials, helping you to choose the right one for the job.

A Bench Vice starts from a size of 3 inches to 12 inches. Size is nothing but the distance between the Jaws when extended fully. What size you need depends on your work profile. Generally 4 inch Bench Vice is the most popular and the cheapest to go for.

5 inch is a medium sized Bench Vice. This suits most people. The price difference among the different sized bench vices depends on their weight and the material used. So, Larger the size, the heavier it will be.

Bench Vices are available anywhere up to 12 inches and even more. The largest are used in Woodworking Industries. The smallest vices are Table Vices which are very small and are popular among Electricians, Jewelers and watch repair shops.

Disclaimer: Most of the Links are affiliate links. If you make any purchase through these links, without any extra cost to you, we may receive a small commission to keep our site running.

This is the most important choosing factor of a Vice. The kind of load you put on a vice decides the material you need to buy. Below I have listed and discussed the most commonly used materials.

The cheapest vice to go for is a Fabricated one. This Vice is assembled by welding metal parts together. The MS parts are cut according to dimensions, then mounted on a jig for welding.

The advantage is that it is cheap. But the disadvantage is, since it is not cast, it has less dimensional accuracy. I mean, if two Vices are welded together, both cannot be dimensionally equal. The reason is that Mild Steel during welding will shrink.

This vice is best suited for those who work outdoors and those who carry rough work on them like welding, bending metal, removal of bearing etc. Of course, Fabricated Vices are not for precision works but they can take a lot of abuse including heavy hammers strikes. They will deform but won’t crack.

Cast Iron is the most delicate among them. If the vice is dropped, it will just shatter.

SG Iron is softer and will take soft hammer Impacts. Hitting hard will break it too. If dropped, there is a 50-50 chance that it might break or deform.

Like said, CI vices won’t bend. They will just crack. They are not intended for heavy duty jobs like pressing bearings, hammering etc. Even over tightening it may crack the material.

If you need a reliable vice which can handle medium loads, Forged Steel Vice will be the best choice. The only disadvantage is its price. Forged Steel vices use the same material used to make professional Anvils.

This is an Affiliate Link. Read our Disclaimer for more details

These vices are forged to its dimensional accuracy and then welded together. They are generally known to be Engineers Vices. Now you may ask if this one is also welded, what is the difference between Fabricated and Forged one? Let me explain.

Fabricated Vices are 100% Welded Vices. Mild Steel Parts with easy to handle shapes like tubes, sheets, squares or rectangle bars are first cut, bent in Brake Press and then assembled. There involves a lot of welding. And because of it, Mild Steel loses most of its dimensional tolerances.

On the other hand, Forged Steel Vices are forged until the exact dimension is received. Most of the parts are forged. They are assembled by using very less welding. This prevents the material from losing its dimensions. Since this process involves a lot of forging, the prices are charged accordingly.

Leg Vice is common among Blacksmiths and Woodworkers. They are designed to be mounted to Table Leg instead on a bench. This provides more work area. The spring provided helps to unmount the job easily. Just remember that not all Leg Vices can take hammer blows. If it is made of steel, it will. If made from Cast Iron, it won’t.
Woodworkers Vice is designed keeping their needs in mind.

Pipe Vices can hold pipes. The Jaws are designed to handle round shapes. Some Bench Vices come along with these types of jaws. If the job is specifically on pipes and round material, these Vices are preferred.

Jaw of a Bench Vice is the one which clamps the workpiece. Types include Fixed Jaws and Removable / Sliding Jaws.

If the Bench Vice has Jaws that are fixed, you may lose the freedom to replace them in case they deform or get damaged during usage. On the other hand replaceable Jaws can be either Sliding Type or Screwable Type.

Hard Jaws will not deform during usage. They are preferred at times when the Bench Vice is used to bend pipes, flatten pipes, extraction of Bearings, and for precision works. Generally Replaceable Jaws are Hardened Jaws.

Tip: You can custom build replaceable jaws for your existing Bench Vice only if it’s existing jaws are Soft Jaws.

Depending on the type of job, there are aftermarket Jaws that can be placed upon existing Bench Vices. They can be made from,

Cheaper Bench Vices have a fixed base. Purchasing a Swivel Base is always better than a fixed base. You have a lot of freedom here. You can rotate the job to any edge of the table.

The only drawback here is that the Swivel Base won’t take a lot of abuse. If you plan to use your vice for impact loads, then I would suggest you disassemble the Swivel Base, and then mount it separately like any other Bench Vice.

Bench Vice lead screw is generally made of Square Threads with Spring Lock. The other type of screw used is V threaded one. This is mostly found in DIY Vices.

Square Threaded Screw is the most reliable one. Because, it provides very less resistance among the mating threads. In any other mechanical applications, square threads are not used for fastening (clamping) purposes. But here in the case of a Bench Vice, since we need smooth movement we use them and when locking is required, spring lock is used.

V Threads generate resistance between moving parts. This will wear the threads on heavy duty jobs where a lot of clamping force is used. When V threads are used, Spring Lock is not necessary. Production Bench Vices always have Square Threads.

Tip: There is not much of Maintenance in a Bench Vice. Regular Oiling of the Lead Screw and the Spring Lock will increase its life.

Note: Hydraulic Vices are also available. They use Hydraulics instead of a Lead Screw.

Some Branded Vices come along with Half Nut Feature. This feature will save the time required for clamping. If you have ever used Chop Saws before, they have the same type of clamping feature. The DeWalt DXCMQRV5 is one such type of Vise with Quick release feature.

When the half nut is disengaged, it allows the Jaws to move directly by hand instead of Handle. When Half Nut is engaged, it works like a normal Vice. This increases productivity.

Some Vices also have Swivel Bodies along with Swivel Base. This helps the user to rotate the job in any direction. And these vices with a swivel body may also have dual jaws. Flat type on one side and Pipe Jaws on the other. The Yost DT08125A/ 750-DI is once such a type of all swivel Bench Vice.

Since it is mounted, there is nothing much to worry about. If you use a Cast Iron Vice, just be careful not to hammer on it. It may break and could cause an accident. And this sums up the article.

Thank You for your time on my Blog. If this content was found useful, or if you have any questions, please let me know in the comments. Have a great sparkling day.